As our two-year programme draws to a close in the informal settlements in East Africa, the DARAJA* team has been tracking the impact of its pilot weather services through the residents themselves. Those individuals whose lives and livelihoods are severely affected by adverse weather conditions.

Zuberi first came to the attention of CCI, when being well respected by the leaders and residents in the settlement, Zuberi was chosen by his peers to utilise the community loudspeaker. He communicated critical weather messages around the community, using a megaphone as and when needed.

Zuberi also kept note of all the SMS messages from DARAJA. One of which was an alert to the upcoming extreme hot season in August 2019, with additional texts urging residents to drink more water. As a result Zuberi quickly decided to set up a business selling water to his fellow Bodaboda drivers and customers.

Not only did the forecasts help reduce the potentially fatal impact of heat on the residents , but they also provided the inspiration to kickstart Zuberi’s new business and get residents to drink more water as a result. A double success for the settlement and its community. 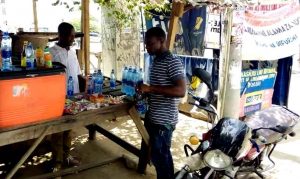 Look out for the DARAJA findings in the coming weeks.

For more information on DARAJA and Resurgence; consultancy, advisory work and speaker engagements from our team of climate experts, please contact dilupa@resurgence.io

DARAJA is being delivered by a consortium comprised of Kounkuey Design Initiative (KDI) in Nairobi, the Centre for Community Initiatives (CCI) in Dar es Salaam, and led by Resurgence. Within two years of launching, DARAJA has received Grade A reviews from the Met Office, and won a prestigious innovation award from the Global Resilience Partnership (GRP), placing it in the top 6% of innovative resilience projects worldwide. DARAJA has also been shortlisted in the British Expertise International Awards for in the category of International Collaborative Project.

DARAJA is receiving additional support to scale out of Nairobi and Dar es Salaam into other global  cities, from the EIT Climate-KIC, the EU ‘s leading public private climate innovation partnership.