Thinking outside of the ‘grid-box’

As the *DARAJA project draws to a close, Becky Venton, Advisor for Weather and Climate Services at Resurgence, shares how she and the team developed local forecasts through technical workshops in Nairobi and Dar es Salaam, at the start of the programme.

Designing for the needs of key city users

In support of the DARAJA Project (Developing Risk Awareness through Joint Action), in August 2019, I visited the Kenya Meteorological Department (KMD) in Nairobi and the Tanzania Meteorological Authority (TMA) in Dar es Salaam.  The aim of my visit was to work with the forecasters from both institutions to develop more locally accurate forecasts for both Nairobi and Dar es Salaam.  I was also to help them to tailor the forecasts to better meet the needs of the DARAJA stakeholders, namely the residents of informal settlements and the organisations that support them.

Through previous project activities including Information Ecosystem Mapping, household surveys and other workshops, a number of specific user needs had already been identified.

The residents of the informal settlements in both cities also wanted details relating to the amount, duration and likelihood of rainfall, with a specific request for the weather forecasts to be more localised. 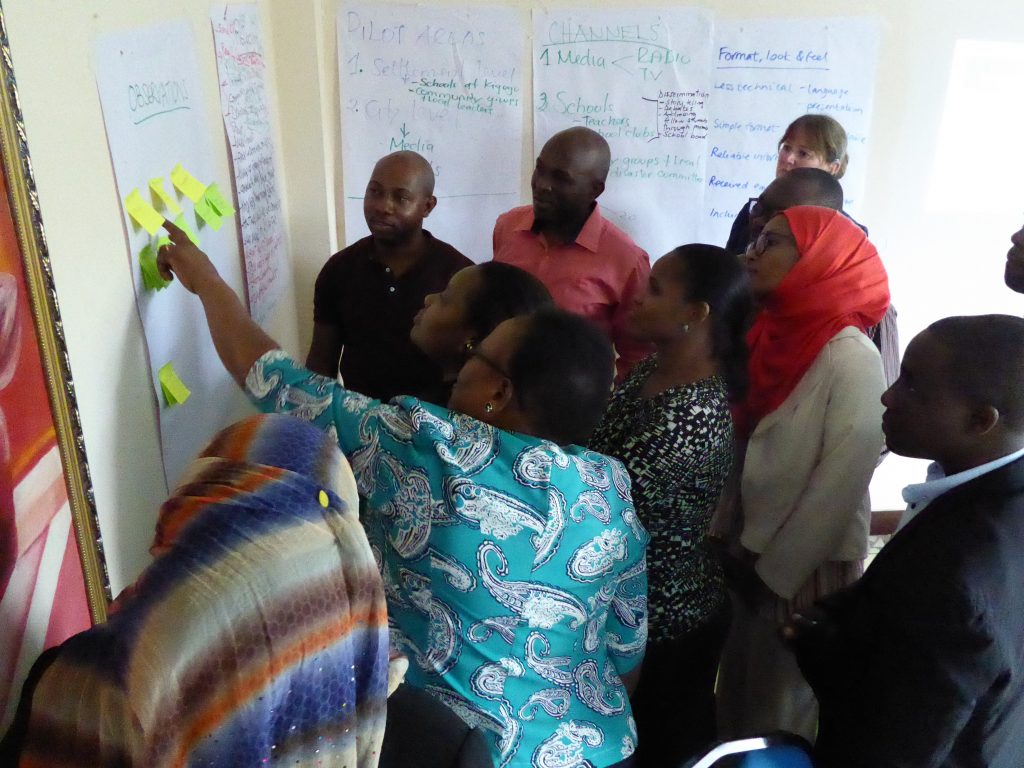 The quest for localised forecast information

The request for more localised forecast information is in no way surprising, especially within cities the size of Dar es Salaam (1,590 km2) or Nairobi (696 km2) but it does present some challenges. In my home country, the UK, we are very lucky to have a supercomputer that is one of the most powerful in the world dedicated to weather and climate.

Alongside advances in science and underpinning technology, increased computing power has enabled the Met Office to improve the accuracy of its forecasts and the lead times for predicting high impact weather events. In part, this has been achieved through increasingly high-resolution computer modelling, where the side of each grid square covering the UK has been reduced to less than 1.5 km in length. It has also been enabled by the improvements that have been made to the models themselves so that they can more accurately represent the dynamics of the atmosphere.

Since 2011, under the World Meteorological Organization’s Voluntary Cooperation Programme, the Met Office has been running a 4.4 km Africa model which KMD, TMA and other National Meteorological and Hydrological Services in Africa can access and use.

Under a sister project of DARAJA within the Weather and Climate Information Services (WISER) East Africa programme, new science has been introduced to this model. As a result of work undertaken within the HIGH impact Weather lAke sYstem (HIGHWAY) Project, the model is now ‘convective permitting’ and as a result, it can better represent severe thunderstorms. 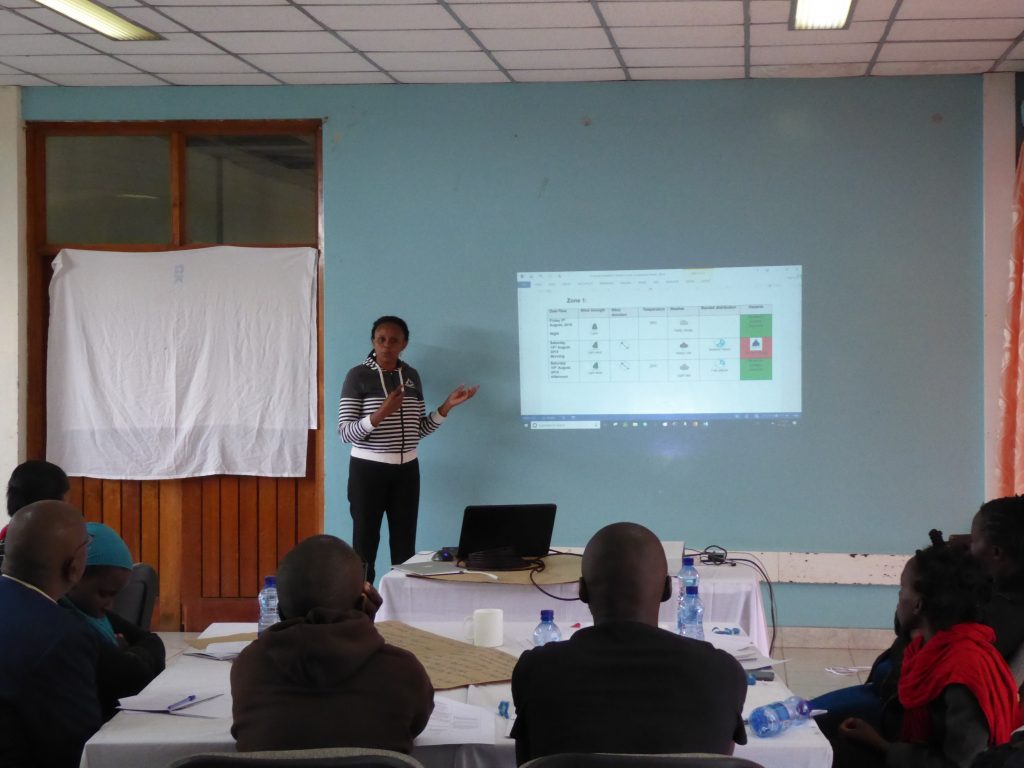 Finding other pathways to local precision

So what can be done? A number of National Meteorological and Hydrological Services (NMHS) have the capability to run their own regional or local models that take output from the Global Producing Centres (like the Met Office) to produce higher resolution outputs.

At the time of my visit to Tanzania, TMA were in the final stages of testing their 5km resolution model and in Kenya, KMD were hoping to have a similar model running in the near future.

These are exciting developments and I am pleased to know that both models are now operational. However, at the time of the workshop (August 2019), it was not certain that the data from a local model would be available during the lifetime of the DARAJA project. I therefore wanted the forecasters to consider other ways that they could make the forecast more locally accurate.

Knowing that for many, the term ‘downscaling’ can be synonymous with running higher resolution models, I chose my words carefully – the task was to make the forecast ‘more locally accurate’, rather than to downscale it. I was challenging the forecasters to ‘think outside of the box’, that is, to think beyond the ‘grid box’ of computer-based numerical weather prediction and to consider other ways that a forecast can be made more locally precise.

During the workshops a number of great ideas emerged, including developing local knowledge about how models perform in certain locations, and comparing temperatures in the project area with those measured at the nearest ‘official’ NMHS maintained observations site.

Other suggestions were to: gather and utilise indigenous or traditional knowledge; analyse past weather to understand any local weather effects; consider climatological zones; and harness knowledge and experience relating to local climatology from other NMHS staff across their organisations.

Within the project, DARAJA stakeholders had already co-produced a number of these resources, including reference guides for urban intermediaries to aid the translation of forecasts as they are disseminated to the residents of informal settlements.

At the end of each workshop, the forecasts were presented to a wide group of DARAJA stakeholders, who were delighted with the developments and had suggestions for further improvement. Both KMD and TMA took on board all of the comments and worked hard to update the forecast designs.

The new forecast templates for Dar es Salaam were prepared for dissemination by TMA. In the case of KMD, there was positive feedback from the end users about the new format of the city forecast which provides weather information for two separate zones within Nairobi County and also uses new weather icons.

Since my visit, similar positive feedback has been received by TMA who now deliver a daily forecast for Dar es Salaam, which they update and reissue every day. The forecasts for each city are disseminated to the residents of informal settlements through a range of channels that have been developed through the project. These include radio, WhatsApp and a programme with local schools.

Ultimately, the improvements to the forecasts have led to greater understanding and use of weather and climate information by the residents of informal settlements in Nairobi and Dar es Salaam. The impact of this includes both avoided loss and improved livelihoods.

Look out for the DARAJA impact findings in the coming weeks.

For more information on DARAJA and Resurgence, on consultancy, advisory work and speaker engagements from our team of climate experts, please contact dilupa@resurgence.io

DARAJA aims to improve the climate resilience of vulnerable populations living in informal settlements in Dar es Salaam, Tanzania, and Nairobi, Kenya by building bridges between communities and weather and climate information providers.

DARAJA is being delivered by a consortium comprised of Kounkuey Design Initiative (KDI) in Nairobi, the Centre for Community Initiatives (CCI) in Dar es Salaam, and led by Resurgence. Within two years of launching, DARAJA has received Grade A reviews from the Met Office, and won a prestigious innovation award from the Global Resilience Partnership (GRP), placing it in the top 6% of innovative resilience projects worldwide. DARAJA has also been shortlisted in the British Expertise International Awards for in the category of International Collaborative Project.

DARAJA is receiving additional support to scale out of Nairobi and Dar es Salaam into other global cities, from the EIT Climate-KIC, the EU ‘s leading public private climate innovation partnership.

How a pioneering African film captured a community’s climate resilience

A case of mythbusting and opportunity: the weather and COVID-19