Race to Resilience, REAP and WISER partner, Resurgence, has been working in the MENA Region since 2017. This has been with the United Nations Office for Disaster Risk Reduction (UNDRR) and 25 cities across the the Levant and North Africa (Jordan, Lebanon, Sudan, Tunisia, Mauritania) and the Gulf (Saudi Arabia, Oman) to collaboratively map their urban resilience capacity.

Resurgence’s resilience mapping in MENA – one of the world’s most urbanised regions – revealed that many of these cities lack dedicated, inclusive early warning systems and open data infrastructure for innovation to protect communities and infrastructure from extreme weather events and escalating climate hazards. This finding was validated earlier this month by the world’s climate scientists in the recent IPCC WG report which points to rising risks such as severe heat and an alarming lack of city level early warning systems.

Resurgence is urgently responding to the above, in MENA, by building out from the region itself one of the Race to Resilience’s Transformation Initiatives: its award-winning DARAJA City – Community Forecasting and Early Warning Service and Partnership.

Already piloted and operational in urban centres in East Africa under the UK Met Office led FCDO (Foreign, Commonwealth & Development Office) WISER Programme, and at launch phase in the Caribbean, the DARAJA Service will build a critical bridge between extreme weather forecasters and communities and key actors in the city -system such as infrastructure, utilities, telecommunication and media. DARAJA has already achieved a 98% early action rate from urban communities receiving early warnings in Nairobi , and a 20:1 benefit-cost ratio on avoided damage and loss from climate impacts.

DARAJA is a Swahili word meaning ‘bridge’ and an Arabic word meaning ‘degree’ as in temperature. The new DARAJA logo for MENA reflects this language duality. 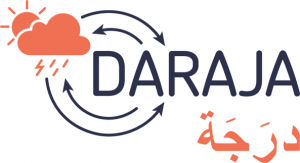 Resurgence is already in discussions led by its MENA Representative, Dr Nuha Eltinay with city partners in Khartoum, Cairo and Addis Ababa.

Resurgence call to action at MENA

At MENA Climate Week 2022, Resurgence is urgently seeking new partners, donors and impact investors to formally launch a MENA led city network for the DARAJA Service in Sharm El Sheikh at COP27. Resurgence is designing the network to maximise its contribution from the Arab World to the global targets of the Risk Informed Early Action Partnership (REAP).

“If you are seeking scalable and measurable climate resilience impact in the urban space in the Arab World, DARAJA offers you a solution. This system has been pioneered outside MENA with the UK Met Office FCDO WISER support, which is perfectly aligned to the UN Secretary General’s call to action on World Meteorological Day 2022 to ensure 100% global coverage by early warning systems in the next five years.” says Mark Harvey, CEO, Resurgence.